Corruption:
Surveys show voters see corruption in our political system as the most pressing problem in the country. Corporate and special interest campaign spending increased in the last decade. Court decisions shifted fundraising towards wealthy donors giving millions of dollars. By wide margins, Republicans, Democrats and Independents feel there is too much money in politics and money has too much influence on politicians. Americans across the political spectrum support limits on campaign spending and believe new laws could limit the influence of money in politics.

And yet, in June 2021, Yvette Voted NO when U.S. House Democrats passed the For the People Act. This bill, now in the U.S. Senate, would crack down on corruption by: Maybe it’s not a surprise that a Member of Congress who failed to disclose that her real estate agency earned nearly half a million dollars in contracts from two state agencies when she was a New Mexico legislator wouldn’t want to impose tough new ethics laws.   See also: There’s a $440K question in NM’s CD2 election.

Voting Rights:
Voting rights have not been expanded since the 1960s. In 2013, the Supreme Court gutted the key provision in the Voting Rights Act of 1965, undermining the most effective piece of civil rights legislation in American history.

And yet, in June 2021, Yvette Voted NO when U.S. House Democrats passed the For the People Act, a bill that would restore and revitalize the Voting Rights Act by:
Voting Security:
The 2016 Russian cyber attacks exposed vulnerabilities in U.S. election infrastructure. Unsubstantiated claims about fraud after the 2020 election have created doubts in the minds of voters about the security of voting machines and ballot counting systems. 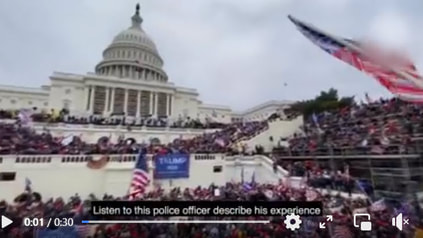 Yvette Herrell VOTED WITH THE MOB:
“On January 6, when an extremist mob attacked the Capitol, Congresswoman Yvette Herrell was forced to hide. But hours later, with blood still on the floors of the Capitol, she voted with Trump and helped spread the same lies that left a police officer dead and many others injured.”

Six months after Trump tried to overturn the election results by spreading the “Big Lie” that resulted in the attack on Congress, the death of several Americans, and the injury of 140 police officers, Yvette skipped a key vote to establish a bipartisan commission to investigate the deadly January 6 attack. 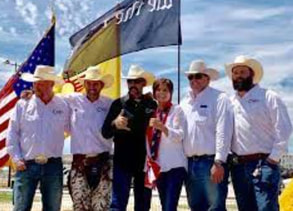 When U.S. democracy was at stake, Congresswoman Herrell – at best – stood on the sidelines.
But was she on the sidelines, or siding with the insurrectionists?
In 2020, an elected official quoted for saying, “The only good Democrat is a dead Democrat,” Otero County Commissioner Griffin, campaigned for Yvette, calling her “a great friend.” After the January 6 insurrection, Griffin boasted of his participation in the assault on the U.S. Capitol. On January 17, he was arrested for breaching the Capitol grounds.  Soon after, Yvette scrubbed Griffin’s endorsement videos off her Facebook page.

On July 11, 2021, Herrell appeared at a conservative political action committee conference, CPAC, where a plan was presented to reinstate former President Trump to office by winning the House for the GOP and appointing Trump as Speaker of the House and then impeaching both President Biden and Vice President Harris.

When she was sworn in as a member of the U.S. House, representing New Mexico’s southern district, Yvette swore an oath to “support and defend the Constitution of the United States against all enemies, foreign and domestic.”

But in her votes and her associations, Congresswoman Yvette Herrell has stood with those who tried to violate the Constitution and overthrow the U.S. government established by the Constitution.

The U.S. Constitution says, “No Person shall be a … Representative in Congress, … who, having previously taken an oath, … to support the Constitution of the United States, shall have engaged in insurrection or rebellion against the same, or given aid or comfort to the enemies thereof.“ (Fourteenth Amendment, Section 3)